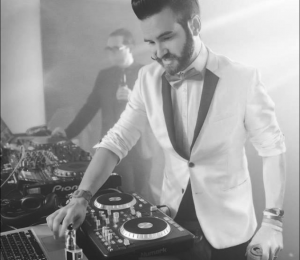 Favourite Propaganda Moment?
DJing with Charlie Simpson from Busted was an amazing night that ended up with Charlie, DJ Dan and myself in a casino until the sun came up, I got to bed at 9am, I stayed there for the rest of the weekend, weeping.

Guiltiest Musical Pleasure?
Good god, too many to mention, I’m an absolute sucker for any 90’s pop banger and have been known to hit up Karaoke bars singing anything from N*Sync to Busted. Cheese? Yes Please.

Favourite item of clothing?
I have a white suit that is covered in Neon handprints and fitted with flashing fairy lights that is my go to Festival attire. It’s affectionately known amongst my friends as “The Rave Suit” and when I put it on, it’s party time.

Standard Post Gig Food?
Hummus. Not even on anything, just scooped out with my bare hands and shovelled into my mouth hole, washed down with a large glass of regret.

Most Embarrassing Moment?
I was once DJing in a club that was so busy I literally couldn’t get to the toilet so had to very discreetly take a piss in an empty pint glass. The club owner came over to see me, spotted it and angrily asked if it was what he thought it was. I panicked and told him it was a pint of Cider. He wasn’t convinced and told me to take a drink if it was in fact Cider, fearing for my job, I did.