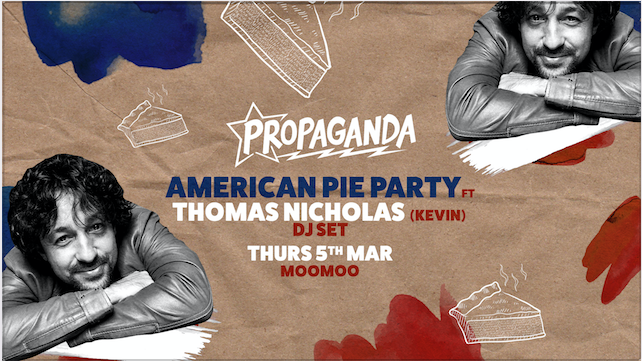 This one time at band camp… it was announced that Thomas Nicholas (Kevin) from American Pie would be DJing Propaganda Cheltenham on Thursday 5th March!

Propaganda’s DJs have played at some of the biggest festivals and events in the world! Including Glastonbury, Big Day Out, Reading & Leeds and Benicassim.
For recent playlists check out: Propaganda Mixcloud
Our latest Spotify playlist is here: Propaganda Spotify
Check out our radio show on Kerrang Radio with Propaganda DJ Gabby! Every Saturday 7pm-10pm.
———————————————————-
Propaganda is proud to present 3 incredible rooms of music every Thursday at Moo Moo, Cheltenham:
:: Main Room – Propaganda
An unrivalled audio visual mix of the best current and classic indie music
:: Room 2 – POPaganda
Your favourite blend of hip-hop, dance and party!
:: Room 3 – Sabotage
Punk, rock & metal anthems