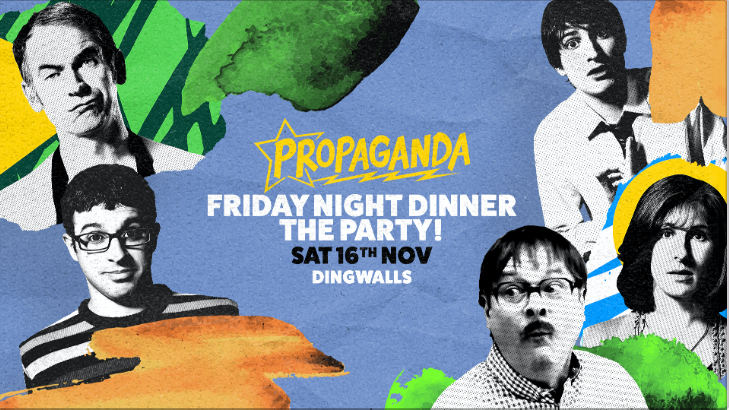 Shalom Jackie! The crumble is in the oven and we’re ready to party! Join us to celebrate everyone’s favourite series: Friday Night Dinner! We will have giveaways including 100s of iconic Martin T Shirts, with his favourite catchphrase “S**t on it”.

Propaganda’s DJs have played at some of the biggest festivals in the world including Glastonbury, Big Day Out, Reading & Leeds and Benicassim as well as at events in Ibiza, USA, Brazil & across the UK! Previous guests who have DJed or performed live at Propaganda include James Corden, Ed Sheeran, Mumford & Sons, Vampire Weekend, Calvin Harris, Haim, Bastille, Ellie Goulding, Foals, Zane Lowe, Busted, Frank Turner, Greg James and much more…
For recent playlists check out: Propaganda Mixcloud
Our latest Spotify playlist is here: Propaganda Spotify
And check out our radio show on Kerrang Radio with Propaganda resident DJ Gabby, every Saturday 7pm-10pm!
———————————————————————————
Propaganda is proud to present 2 incredible rooms of music every Saturday at Dingwalls, London:
:: Main Room – Propaganda
An unrivalled audio visual mix of the best current and classic indie music
:: Room 2 – Popaganda
The best in dance, hip-hop and chart hits